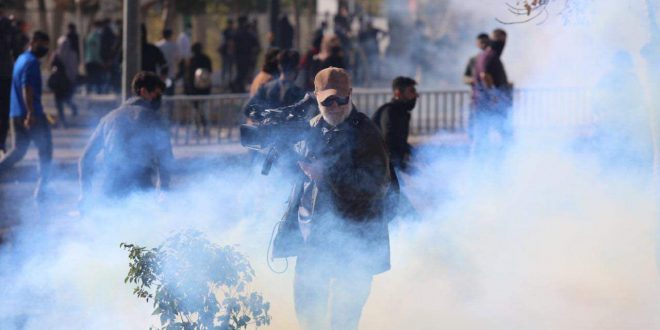 The Press Freedom Advocacy Association in Iraq recorded five violations against media cadres in Erbil, Sulaymaniyah and Dohuk during the two days of demonstrations taking place in the cities of the Kurdistan Region.

Security forces in Sulaymaniyah Governorate prevented Payam channel staff from covering student protests near Sulaymaniyah University on Monday, while the Sepideh channel team suffered severe suffocation due to the use of tear gas to disperse the protesters.

The Payam channel correspondent in Sulaymaniyah, Ramyar Othman, told the Press Freedom Advocacy Association in Iraq that he was accompanied by his colleague, photographer Nawzad Mohammed, when security elements from the Asayish surrounded the vicinity of Sulaymaniyah University to end the angry protests organized by a number of students that were demanding the release of their overdue dues since 2014, and prevented the cadre from filming the protests.

He added that the force used tear gas and an electric pistol to disperse the protesters. As a result, the Sepideh channel staff suffered severe suffocation and minor injuries.

The association learned from the correspondent of NRT channel in Erbil, Joman Mohammed, that he and his colleague, the photographer Mohammed Ismail, were beaten with batons by the Asayish, and that he was prevented from covering the protests that started today, Tuesday, in Erbil.

The police forces also prevented the Sepideh channel staff from covering a solidarity stand by Dohuk University students during the channel’s live broadcast.

The Press Freedom Advocacy Association rejects the prevention methods taken by the security forces in Kurdistan against the media and press crews, as they are flagrant constitutional breaches, and in violation of what is stipulated in the international conventions that the Kurdistan Region authorities brag about.

Meanwhile, the Association calls on the President of the Kurdistan Regional Government and the responsible bodies in the region to stop preventing the media from taking its role in reporting what is happening on the scene in the region, observing the principles of law, and respecting the constitution that guarantees freedom of presswork.

Furthermore, the Association calls on the federal government to pay attention and take immediate action regarding press violations in the region, and to stop turning a blind eye to the repression, detention, imprisonment and displacement of journalists committed by the region’s authority.

It also calls on the United Nations and international organizations to take a position against the authority of the region.