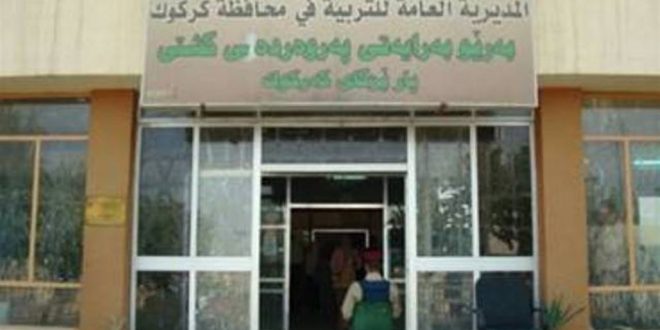 A Fellow Journalist was denied coverage in a school after his expulsion by Kirkuk provincial Education Director, Abdul Ali Hussein Touma, as shown on camera footage.

Karwan Salehi, a correspondent for the Kirkuk Now news agency, told the Press Freedom Advocacy association in Iraq by phone that as the press cadres are busy with covering the launch of the new school year, he received a series of abuses by the provincial Education Directorate, indicating that he and a group of colleagues belonging to (Al-Iraqiya TV, Kirkuk TV and Anatolia news agency) were expelled from school and verbally abused.

Salehi , al-Iraqiya TV’s correspondent in Kirkuk, said that his colleague

“Taghrid Naqsh Bundy”, showed one of the organizers a letter allowing access to the opening ceremony to cover the province’s schools, but the official ripped the letter and expelled the journalist from the school.

The Press Freedom Advocacy association in Iraq condemns what journalists are subjected to today in Kirkuk, and considers it a violation of constitutionally guaranteed freedom of press and media work in the country.

The association rejects repeated attacks on journalists in Kirkuk by provincial officials and calls on the local government in Kirkuk to immediately open an investigation on the expulsion of journalists and hold the Director of Education accountable for his abusive behavior, which indicates not complying with the constitution and laws in force..