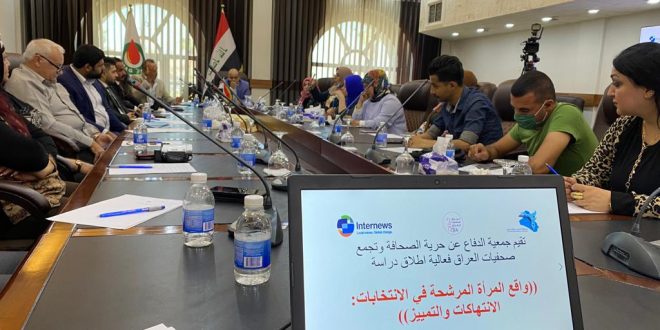 The Press Freedom Advocacy Association/ Iraqi WomenJournalists Gathering, in cooperation with the Independent High Electoral Commission, the Ministry of Interior and the Independent High Commission for Human Rights, organized adialogue session to release the results of the poll on the reality of women candidates in the elections, and the factors behind the violation of their rights, on Sunday.

Assistant Media Spokeswoman of the Independent High Electoral Commission, Ms. Nebras Abu Suda, was among the attendees along with the DG of the Anti-Rumor section of the Directorate of Relations and Information, Brigadier General Nebras Mohamed Ali, the Director of the Information Section of the Independent High Commission for Human Rights, Mr. Sarmad al-Badri, and a number of journalists and Media workers. 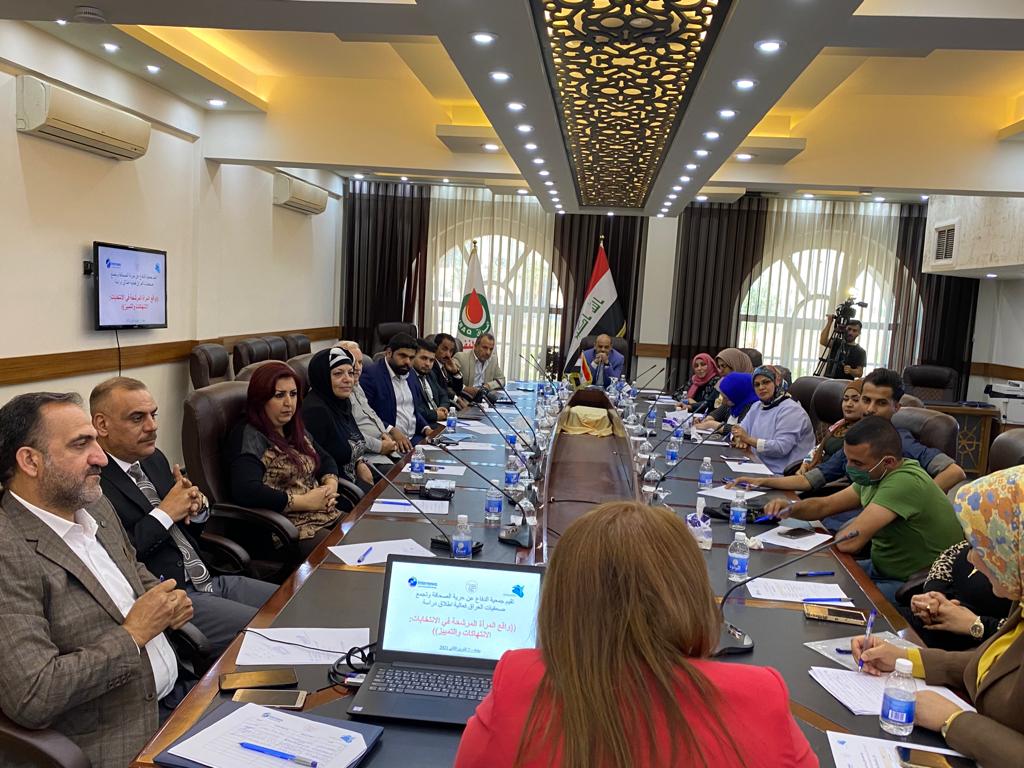 The session, moderated by the Executive Director of the Press Freedom Advocacy Association, Ms. Reya Faiq, displayed the opinion of the Electoral Commission on the violations against women candidates as well as the number of women winners during these elections compared to the previous elections held in 2018, where women were able to overcome the quota inside the dome of parliament.

Abu Suda reviewed data on the number of winners per province between previous and earlier elections.

For his part, the Director of the Anti-Rumor Department in the Ministry of Interior, Brig. Gen. Nebras Mohamed Ali, spoke about the role of the ministry in reducing cases of defamation and stabbing women candidates and ordinary citizens alike, as well as addressing the constitutional provisions and laws that sponsor freedom of expression in the country. The session stressed on the separation of freedom of expression and abuse and defamation, and urged the need to pass the electronic crimes law to reduce these cases. 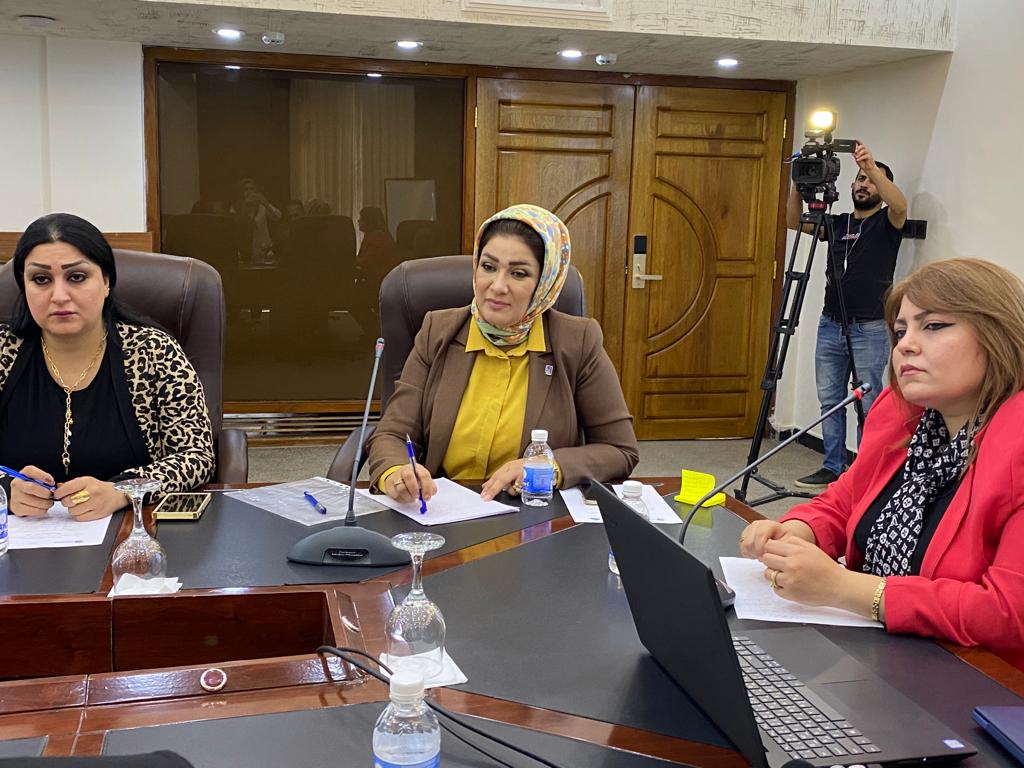 The session included the presentation of the results of the survey by Campaign Manager Israa Tariq, explaining that the survey was prepared by a specialized anthropologist for more than a month and it included 13 direct and branch questions, distributed (430) samples exclusively for Baghdad, and the most prominent results of the study were that 58.4 76.8% said they would vote for a woman during the early elections, more than half of the sample of women said they would vote for their group to be represented in the new House of Representatives, and 40.2% said that the candidate’s propaganda performance during this Elections are no better than during previous elections, and 25.6% of young respondents said influential parties are the ones opposing women.

The session also included a speech by the Director of Information Department of the Independent High Commission for Human Rights, Mr. Sarmad al-Badri, who reviewed the commission’s tasks and sections, and stressed the need to educate citizens to follow legal procedures in case of violation and that UNHCR is ready to provide the necessary assistance and develop solutions to the reports it receives.

Al-Badri concluded by saying that there was no complaint against a female candidate during the early elections. 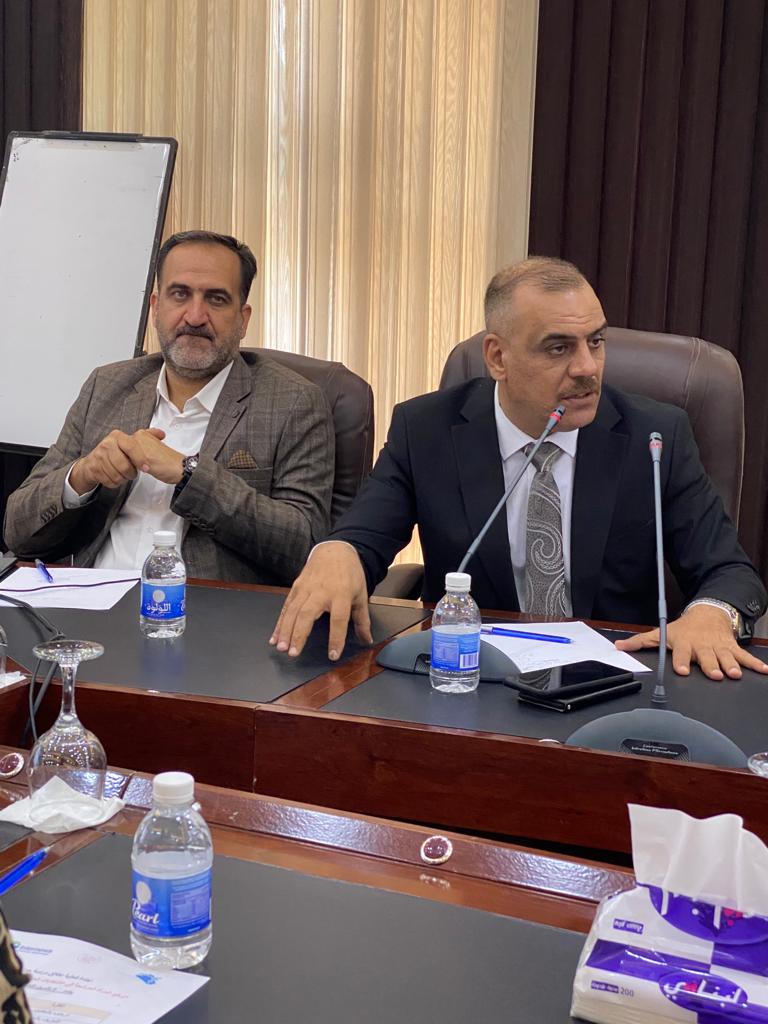 The meeting concluded by reading the recommendations to the attendees:

1- Intensifying awareness campaigns to free women from male domination, as revealed by the study, which was the primary reason for the belief of the candidates behind the insult and stabbing campaigns against women candidates.

2 Strengthening the media aspect of women in decision-making posts through workshops to train them on how to deal with the media, because it has a great impact on convincing public opinion.

3 Focus on the negative consequences of insult and defamationcampaigns against women candidates, in collaboration with the media and civil society organizations to provide awareness programs in this regard.

4 Focus on the performance of the winning independent women candidates in the current elections, to create a model compared to the former deputies, to create mental comparisons in public opinion, and erase the stereotype of former women deputies.

5 The need to work on the age group (18-39 years) in knowing their interests and correcting their opinions, especially since most of them participated for the first time in the electoral process.

6. The need to give women the freedom to choose whether or not to participate in elections, as well as the freedom to give their votes to whom they wish and to eliminate male domination within the family.