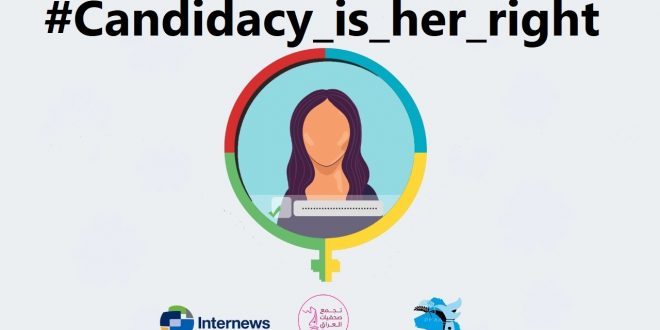 The Press Freedom Advocacy Association in Iraq has recently announced a media advocacy campaign to eliminate defaming women Candidates to firm their entitlement to run for the elections. The campaign ” Canidacy is her Right”  was launched a month before the early parliamentary elections, and depended social media sites as a portal for publishing and promoting the campaign.  The campaign included posters and awareness videos posted on Facebook and through advertising screens in the capital Baghdad, as well as the participation of a number of female journalists and media women who ran for elections to support the campaign.

The campaign structured a study on societal reasons that led to an increase in defamation of women candidates (specifically in Baghdad), the results of which will be announced next month. After following up on the process of holding elections and announcing the preliminary results and enabling women to win 97 seats in the Iraqi parliament, according to statistics published by the Department of Women’s Empowerment in the General Secretariat of the Council of Ministers, 14 seats more than the quota were allocated to women, including two minority winners, while these results showed that 57 women won their voting power without the need for quotas, confirming that women are entitled Decision Makers.