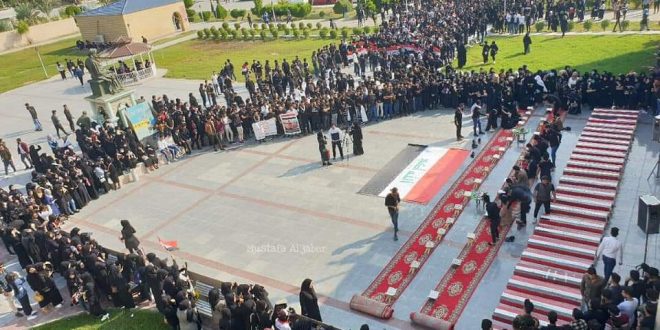 Security forces tasked with protecting the security of Basra University have prevented the media from entering to cover the protest stand on campus.

Ahmed Majid, a member of staff of Almirbed told Press Freedom Advocacy Association in Iraq that the campus security prevented Nour Altimimi, correspondent and the cameraman of Almirbed channel from entering the university for covering the students protest as it did with other media groups that reached the scene at different times.

Adding that “He contacted university media officer Salem al-Uqaby to find out the reasons for the ban, which revealed instructions issued by the provincial operations command to prevent journalists from entering the university and cover these protests”.

Press Freedom Advocacy Association in Iraq strongly rejects the ban on journalists from carrying out their duties, especially since the measure violates the Constitution and freedom of journalism in the country.

The association calls on the relevant authorities and security forces in the province to deal with journalists in accordance with the law and the constitution, show flexibility, and allow the media to deliver the reality of the protests that have erupted in the provinces recently. The association also calls on the government to stop the despotic measures imposed against the media and the attempts to prevent it from covering events.