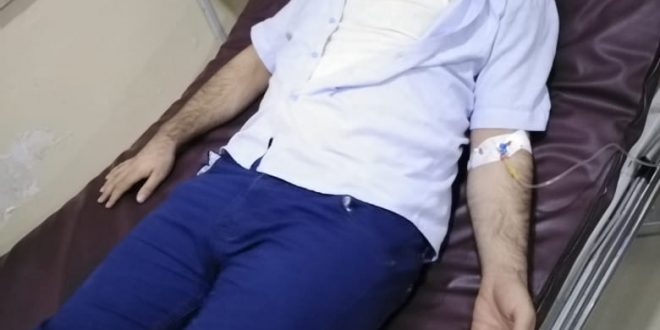 KRG is still holding three journalists in detention of Dohuk and Zakho, but they do not know what kind of charges they have been arrested for.

Press Freedom Advocacy Association has informed colleagues in Kurdistan of the deteriorating health of one of the detainees and was taken to the emergency hospital in Zakho following his hunger strike.

According to the information received, journalist Farouk Omar was arrested on the night of August 19th, and was sent to prison in Zakho security, without being aware of his charge, which led to a strike on food and drink, after a couple of days he was hospitalized in Zakho Emergency Hospital, and his health remains poor at the time of writing.

According to reports, Ahmed Zaghui, an NRT correspondent, was arrested on the same date, but remained in detention and his lawyer would not be allowed to meet him until the 25th.

Lawyer Khattab Omar, a brother of journalist Farouk Omar, said the authorities had suddenly informed him that his brother was in hospital in a very critical condition because he had been deprived of food for several days, which had worsened his health.

The regional authorities are still holding Ahmed Zakhoi, a freelance journalist, who was arrested in Duhok on June 18, as well as journalist Qarman Shukri Zainaldin, who has been detained since June 27, and his fate remains unknown. The son of the late journalist Shukri Zainaldin, who worked for the KNN channel of the Movement for Change at the time, was assassinated in 2016, and regional authorities said that a wild animal attacked Shukri while he was in a remote area.

However, the authorities had earlier released two journalists who had been detained at the time of the demonstrations in Zakho and Dohuk and their surrounding areas, in addition to the above mentioned, Mihfan Majid, Kamal Ramzi, Mohamed Said Doski, Shakiran Zebari, Difaa Herki, Nihad Ormari, Karwan Sadiq, Ayhan Said, Mir Neroyyi and Mirin Srini.

Ahead of last week’s demonstrations in the region, particularly in Dohuk, Kurdish authorities launched a campaign of arrests of dozens of journalists, mediapersons and activists, most of whom were released on bail and vowed not to demonstrate again.

Authorities in the Kurdistan region closed the offices of The NRT in Dohuk and Erbil on 19 and 20 June without any legal basis.

Press Freedom Advocacy Association in Iraq, which strongly condemns this arbitrary action against journalists, considers the behavior of the authorities in the region to be the result of the production of a new dictatorship in an Iraqi region, after the authorities arresting anyone whom they believed to have played a role in inciting constitutionally guaranteed demonstrations.

The Association is surprised by the Federal Government’s silence over this arbitrary measure and the repeated violations of the Iraqi Constitution, which is a sponsor of freedom of expression and the press, as well as the disregard of the free international community for what has been going on in the Kurdistan region of Iraq.

The association calls on the Iraqi federal government to take its role and constitutional responsibilities to protect fellow journalists, in compliance with the explicit provisions and articles of the Iraqi Constitution in this regard.

The association also calls on the free international community and UN-organizations concerned with press freedom and freedom of expression to show solidarity with the regional journalists and to take a firm stand on this issue.