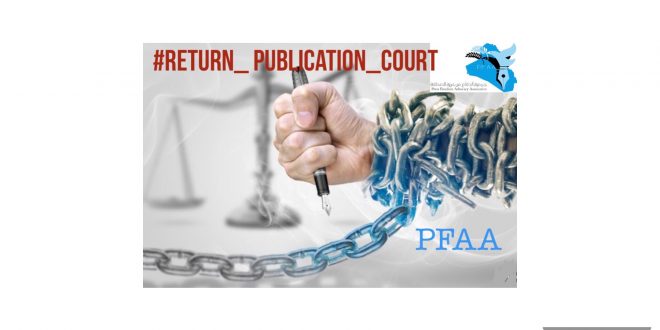 Lawsuits against journalists in Iraq are on the rise, due to the political will to keep dictatorial laws in force to this day, in order to muzzle mouths and reduce the space for freedom of expression and constitutionally guaranteed journalistic work.

Some parties and authoritarian figures seek to abuse journalists, as a punitive measure of what they have revealed or spoken of, through these laws, despite of clearly violating the constitution.

The Press Freedom Advocacy Association in Iraq calls on all fellow journalists and opinion-makers to participate in this media campaign, seeking to pressure the Iraqi legislature to deal with outdated legal articles, the re-establishment of the Publishing and Information Court, given the sensitivity of the cases against opinion-makers, and Iraq’s international recommendations, which included the establishment of the Media and Publishing Court, under the hashtag: #Return_ publication court.

On July 12, 2010, the Supreme Judicial Council of Iraq decided to set up a court specialized in publishing and media issues, and the decision published on the judicial authority’s website provided for the allocation of a court in the presidency of the appeal Court of Rusafa to deal with complaints and cases related to the media and publication in its civil and penal sides, and allocated to this court an experienced judge who is fully aware of the role of the press and the media, and is aided by a committee of experts from the law and the press.

In April 2017, the Judicial Council abolished a number of competent courts, including the Publishing and Information Court, for lack of law enforcement, without seeking to pass a law that could revive it. Cases of the cancelled court are referred now to other courts according to functional and area affiliation, which has equated the issue of publishing and information with other criminal cases.