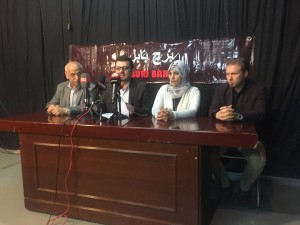 The attached Panel of legal and Media signatories expresses its condemnation against all acts of threat and tracking that were imposed upon the Electronic Press site (Alalam Aljadid) by the Head of Communications and Media Commission in Iraq, on February 12th, 2016. The e-journal had released earlier, a report that exposed the involvement of the Head of CMC in financial violations, according to their sources; an evident proof that instigated the latter to seek aid through tribal demands and procedures. After exercising pressure to delete the report from the journal’s website, CMC head submitted a lawsuit against the Editor in Chief and accused him of defame and demanded a financial compensation. Given the attitude of the Head of CMC is considered a dire violation of the stipulations of the Iraqi and International regulations that secure the freedom of expression, all signatories declare the formation of an Advocacy Panel that would be committed to represent the Alalam Aljadid E- press in front of the law in order to ensure the provisions of a fair trial that composes of two balanced sides. Moreover; it would prevent any illegal actions outside the legislative circle. We hereby confirm that our conduct came as a result to our faith in the freedom of Expression that was protected by International legislators and national constitution and is considered the corner stone of any democratic civil society