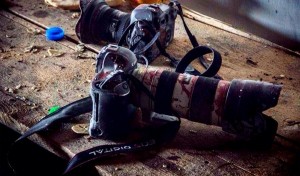 Press Freedom Advocacy Association in Iraq released its total count of the journalists that were injured during the demonstrations held on Friday. The 14 victims included a critical case.

ANB camera man, Humam Abu Auf, was shot by live bullets directed to his feet. The incident came shortly after losing his conscious due to intensive effect of tear gas; currently hospitalized.

At the time that Press Freedom Advocacy Association in Iraq, confirms the intention of 5targeting media personnel by security forces, to obstruct coverage of demonstrations, it considers the incident a dire violation for what was stipulated by the constitution and valid laws and a clear blockade facing journalism.

The Association holds PM Haider Alibadi the responsibility for ensuring the safety of all journalists. And holding all those who participated in targeting them accountable. Especially the incident of shooting the feet of ANB correspondent by a security officer; the association stresses upon its firm intention to hold him accountable.

The Association points out that the event is unprecedented in Iraq and is the first since 2003, it is the first time that 13 journalists get injured in a few hours in spite that the media witnessed fiercer environment with militias and sectarianism.