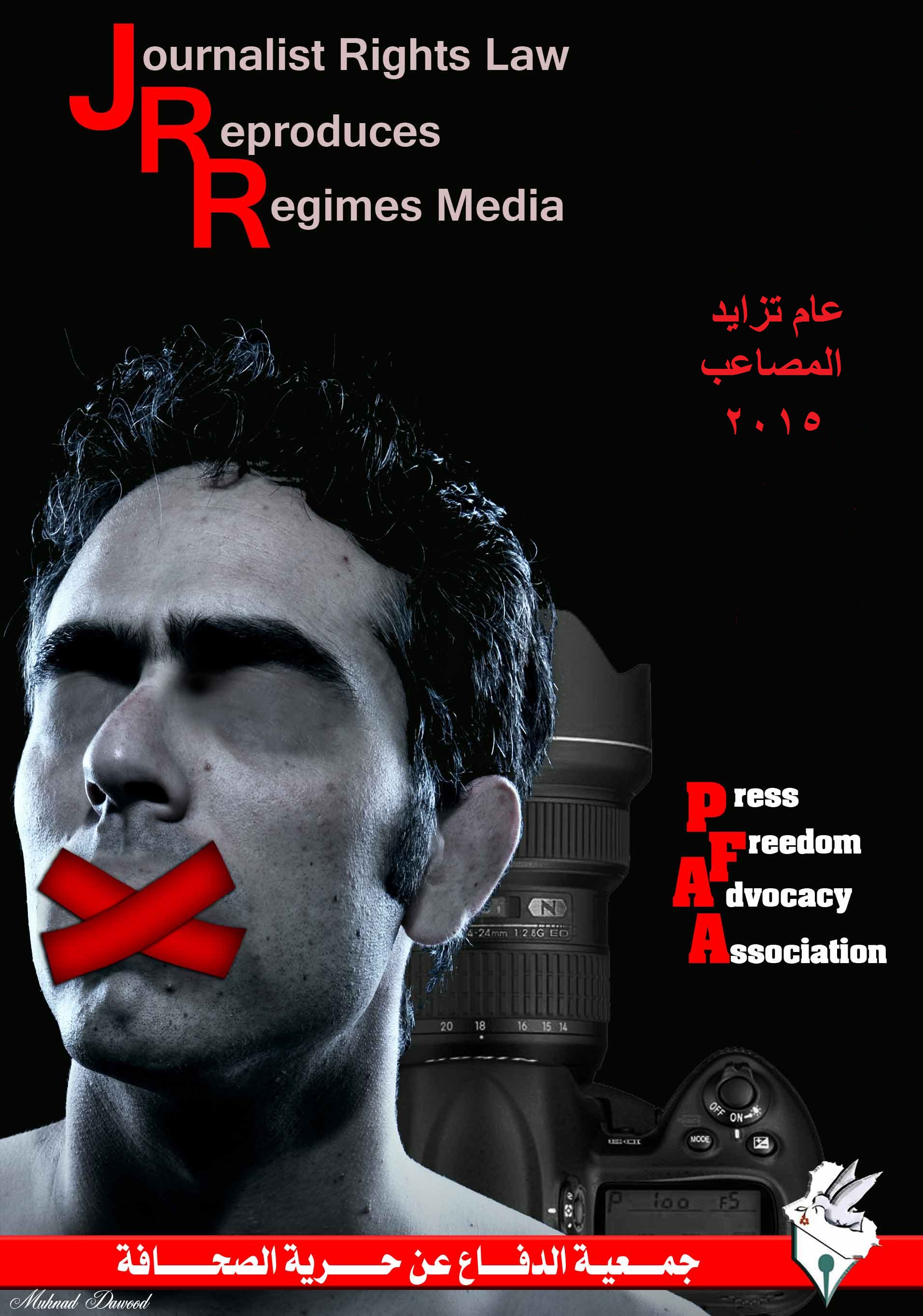 In 2015, the press community in Iraq witnessed a rise in risk and new channels of danger threatened their work and lives.
Press Freedom Advocacy Association in Iraq recorded that 28 journalists have been killed in all parts of Iraq due to their duty. 25 journalists were subjected to serious injuries that they had sustained during military operations that they covered, 4 journalists with an unknown fate, are still unreported till now.
180 cases of violation were recorded against journalists varying between killing threats, imprisonment, arresting, beating, and obscuring or delaying duty. More than 307 lawsuits and 497 investigations, were filed against journalist or media institutions at Media and Publishing Court alone. Most of them were under the item of “Publishing, Defamation, and Denouncing crimes”in the Iraqi criminal law no. 111 /1969, and other laws inherited from the previous era and all its stipulation were reactivated under the title of (press rights) that was legislated by Iraqi Parliament in August/2011.
In spite the fact that targeting, abducting and killing journalists by (ISIL) are the main features of the media scene during 2015, but legislation remains the primary risk that endangers freedom of expression in Iraq, especially the efforts exerted by political powers to enforce new legislations that threaten the freedom of expression and undermine democracy, especially the bill on (freedom of expression and peaceful demonstration).

17 journalists; Victims of terrorist (ISIL)
In 2015, (ISIL) executed 17 journalists in the areas that are under its controlaccording to available information and Ninevah has ranked on top.
Given the difficulties involving the access to information in Mosul and Anbar, Press Freedom Advocacy Association in Iraq provides the following information without claiming that it is final; it is believed that many executions are concealed.

3 journalists killed in duty
In provinces considered relatively stable, incidents of neutralizing and killing journalists took place because of their duty. The following list shows the incidents.
1- 25/3/2015: in unclear circumstances press photographer Ahmad Alawwady of Alahad channel, was killed by unidentified persons in Karbalaa.
2- 4/5/2015: Raad Ajubouri, a presenter in Alrashid Satellite Channel was killed by unonymous persons at his home in Alqadisiya district/ Baghdad.
3- 29/10/2015: the body of the journalist Sayab Aluqaby was found by the Security forces of Basrah province. The victim was a member of staff of Al-Iraq Times website, after being abducted for several hours.

It’s worth mentioning that the press community lost the journalist photographer Alaa Al-Juboury, on 14/11/2015. The victim was a member of staff at Alfurat satellite channel, and was abducted in order to seize his vehicle. The Association also listed the killing of the editor of the official website of Ministry of Trade, journalist Nadhum Naiim, who was a freelancer for several local media websites, on 20/9/2015.

183 violations against press personnel
Press Freedom Advocacy Association in Iraq listed the most severe violations against the press community as follows:
1- KRG authorities close down 4 media offices in Erbil.
2- Deporting 9 journalists working for K.N.N and N.R.T, from Erbil to Suleimaniya after seizing their badges.
3- 25 cases of detaining and confinement in different parts of Iraq.
4- 128 cases of beating and prohibition of holding duty by security forces where most of the incidents were recorded during the demonstrations that swept 10 Iraqi provinces during the second half of 2015.
5- 18 incidents of targeting certain media people or media bodies by security forces or unanimous sides including KR.
6- 6 cases of abduction where victims were released afterwards.
7- 19 death threats against journalists most of them in Basrah.

It is worth mentioning that the level of threats increased noticeably during 2015; the fact that eventually resulted in internal displacement or migration, others, and due to the aforementioned circumstances, decided to leave the press community for good. Most of those threats originated from the media action in providing coverage for the demonstrations that continued during the second half of 2015. The Association obscures the journalists’ names for the sake of their safety.
In spite of PM’s decision that no security permits are required to hold media coverage, many operation commands in provinces still demand those permits.
Many field correspondents told different media sides that security checkpoints still demand permits in spite of the clear decision released by PM Hayder Al-ibady, Chief Commander of Armed Forces. Media correspondents confirm that security forces act according to personal stance and do not oblige to laws.
Lately, changes took place in the process of foreign media visas where Ministry of Interior Affairs and Media and Communications Commission have their say concerning the foreign media personnel. At the same time recommendations were set out that any foreign media body that has no office in Baghdad is not authorized to enter. Tens of foreign journalists were denied entrance.

Journalists without job security
Press Freedom Advocacy Association in Iraq recorded relieving hundreds of media personnel from their posts until the end of October 2015, without prior notice or financial compensation.
In spite of the difficulty of providing precise information about the relieved journalists; a primary estimation of (1000) members of staff were affected who were either editors, or correspondents and even presenters of daily programs.
The association listed closing 8 media bodies, which only one returned to work after relieving all its staff; Whereas the remaining seven left the press community forever. It is worth mentioning that most of the media personnel did not receive any compensating allowances by their administrations. No concern was shown towards any of the journalist’s fate, especially that no contract is signed between both employer and employee.
It is also noticed that due to the financial restrictions that some media institutes are witnessing there is a rising threat in dismissing cadres and that of course would impose growing concern on workers.
According to media managers; the main reason for this action is that most of the politicians are no longer interested or have the capacity of sustaining such channels, due to the oil crisis and its deteriorating status. In addition that the revenues from advertisement also witnessed a stand still. Another reason is that many of the media channels were established for electoral purposes and as political trends have changed, the will of keeping those channels have subsided.
Press Freedom Advocacy Association in Iraq considers the treatment of Editors, journalists and all workers in media institution in this irresponsible way a grave violation and insult at the same time, especially that Iraq holds a set of legislations that ensure the jobs security and financial obligations as stipulated in Iraqi constitution.
At the time that the Press Freedom Advocacy Association in Iraq considers the financial difficulties that the country is witnessing, it focuses upon the necessity of signing contracts for employment to secure the rights of both sides and in accordance to valid laws that are stipulated in the Iraqi constitution. And calls all media institutes to pay the dismissed cadres their financial dues especially that they hold the right to sue the media institutes that have adopted such a conduct.

Legislature…The concrete challenge
In 2014, many journalists and media institutions faced lawsuits filed by political parties and VIPs. The Court for Publishing and Media alone, 307 claims were filed and 497 investigations were in process. That in fact reflects the nature of the media legislature that does not secure or protect media workers but on the contrary, it threatens them.
The law of (journalists’ rights) that was ratified by the Iraqi parliament in August, 2011, still represents a true challenge and a great risk for journalism in Iraq; The flaws of this law circle around 5 items that are an extension from the past period that is known for its rigid attitude against freedom of expression.
Big disappointment was heartfelt by the press and media community once the bill that was set by the previous government was passed with all its gaps and flaws. The law composed of items that are not included in the legislations of countries known for dictatorship. Last November the law was set for the second reading as a routine to pass the law; an action that agitated full reservation in the press community.
It is worth mentioning that the Parliament should look through a set of legislations that are inherited from Saddam’s era:
1- Iraqi criminal law No. 111 /1969.
2- Iraqi publications law No. 206/ 1968.
3- Ministry of Information Law 2001.
4- Law for film and related contents No.64/1973.
5- Law for journalists’ syndicate1969.

In addition to the aforementioned laws there s the law that was issued by the Coalition Provisional Authority No. 14, for 2003 which bestows the prime minister the power to close down any media body and confiscate its equipment and assets and even the power to imprison its cadre.
Given the facts mentioned above, it is clear that the Government not only has the right to track all media activities and content in the country, but it also holds the right to nationalize all media institutions. It’s noteworthy that most inherited legislations prohibit media privatization and is clear in considering all media bodies a government property.