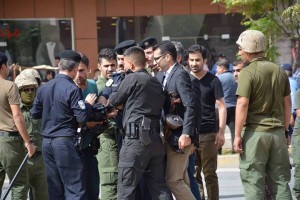 Thirteen press teams in Erbil and Sulaimania were attacked, imprisoned, their equipment were confiscated and they were prevented from carrying on their duties to cover the demonstrations that flooded the province because of bad economic and financial situation.

Representative for Press Freedom Advocacy Association in Iraq said that two NRT teams were seized and their equipment confiscated near PM’s office during making interviews with citizens. Kawa Abdulqadir, Executive Manager of the Channel said that two teams were attacked and heavily beaten and abused by security forces near PM’s building.

He added that 15 members of the security forces have beaten channel correspondent, Ayaz Abdullah, and cameraman Muhammed Edris till they blooded their mouths. The channel’s second team operating in Erbil included its correspondent, Herish Qadir and cameraman, Muhammed Edris were prevented from coverage as they were interviewing some people and no illegal act was committed by them.

Oweina correspondent, Panar Hidayat , was attacked in Sulaimaniya city during covering the protests of primary and secondary school teachers, all equipment including cameras were confiscated. Our representative said that NRT team; Avar Hamid and Bahouz Nasruldin were subjected to beating and imprisonment and their equipment was confiscated during covering Employees’ protests in Sulaimaniya. The channel’s correspondent in Chuman area in Erbil province, Ramal Ahmad, was beaten by security forces and his camera taken in spite that he wasn’t exercising any action.  On related level, our colleague Khaled Mohammed , NRT correspondent, was imprisoned for one hour  without a legal motive.

The Association’s representative clarified that Rudaw team in Rania area that is linked to Sulaimaniya, including correspondent, Sunger Abdulrahman and photographer Ahmad Omar, has also been attacked and seized for hours by area’s security forces. Ahmad Omar said that his body still sustains the prints of severe attack and that he was subjected to harsh abuse and humiliation by Asayesh forces. At the end he was warned not to cover any popular demonstrations or protests.

Aras Rasuol, Piyam correspondent added that the security forces prevented him from covering Tuesday’s demonstration, as they cut the live broadcast by force.

Rika correspondent Heymen Ali and photographer Akram Rasoul, were seized and lost their equipment; the same forces confiscated the cameras of  Ruz News, Speda, and KNN; the latter was prevented from coverage for two hours at Ranya after taking away his equipment.

At this time, ORT correspondent, Lamyaa Rasoul that an MP from Altaghyir bloc provoked against her by the excuse that she was operating for the benefit of a channel that steals people’s bread, as a sign that refers to the president of KRG; she replied that she enjoyed a professional neutral conduct.

Press Freedom Advocacy Association expresses its dire concern towards rising violence against press and media-workers in KRG. It considers the aforementioned a clear violation to all international agreements and constitutional stipulations that protect the right of expression and exercising press freedom. The aforementioned represent a dangerous recourse towards tyranny and holistic regimes. At this point the association raises its calls to support the press community in Iraq by international organizations that are deemed serious in controlling such situations. It demands that all aggressors be held accountable especially politicized actions.

The association considers the silence of the parliament towards all those attacks and incidents a serious indicator that highlights its irresponsible conduct towards freedom of expression in the country and is more likely to prefer adhering to political agendas than to support and impose the Iraqi constitution and demands that the president interferes urgently to deal with the case.