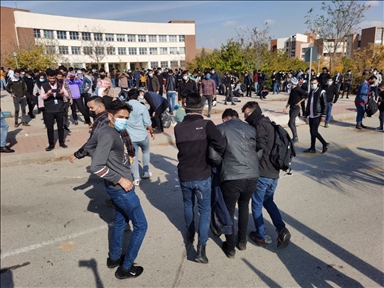 A riot police force in Erbil, on Wednesday morning, prevented the cadres of 6 satellite channels from covering the student demonstrations that continued for the third consecutive day in Erbil.

The coordinator of the Press Freedom Advocacy Association in Erbil said that the security forces prevented employees from the satellite channels (Sepideh, Payam, Gali Kurdistan, NRT, KNN, Rudaw) from covering the student protest in front of the Ministry of Higher Education gate in Erbil. They also assaulted a number of journalists by beating them to keep them away from the students gathering site, and prevent them from filming the escalating events.

The coordinator added that the security forces used tear gas, incendiary materials, and electric sticks to disperse the protesters, but focused on targeting journalists and their parking places, leading to several cases of suffocation.

The Press Freedom Advocacy Association in Iraq expresses its concern about the high incidence of attacks on journalists, and their prevention from practicing their journalistic work, in conjunction with the outbreak of protests in the region. These violations are among the legal violations committed by the regime in the region against the freedom of journalistic work.

The association further calls on the authorities in the region to stop the use of repression and police methods that target journalists and media cadres.

Moreover, the association confirms that it is in the process of broadcasting images of violence to the outside world, to reveal the extent of what journalists are exposed to during their coverage of the events of the demonstrations, to investigate the perpetrators and to protect the remaining space for the press and media in the Kurdistan Region.