Documents: IMN terminates services of a journalist based on MCC recommendation 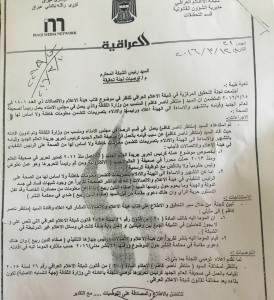 Press Freedom Advocacy Association in Iraq acquired the documents issued by the Iraqi Media Network that state the termination of the services of Journalist Muntadhar Nasser.
Quoted from “the letter states that an investigative committee was held to enquire journalist Muntadhar Nasser, for violating item no. 20 of IMN law no. 26 for 2015, being the head of an independent E-journal. The committee’s book included the recommendation of the Media and Communications Commission that Muntadhar Nasser is an employee at IMN and head of the E-journal. in spite of the journalist’s statement that his work at the E-journal is voluntary and that the body is not registered yet; the investigative committee , in spite of that, recommended terminating his services.
At the time that Press Freedom Advocacy Association in Iraq expresses its dire concern about the committees and IMN’s decision, it highlights a number of faults in the incidence. The observed data suggests that no violation has been made in item no. 20 of IMN law no. 26 for 2015, that stipulates “all members of IMN staff are prohibited from holding two jobs, or to hold any title in an entity not related with IMN.” The purpose of this statement is to prevent holding more than one salary; thus the committee made no effort in investigating the nature of his second commitment in (alAlam alJadid) E-journal and if the description mentioned in the previous law applies to the journal. The investigation was far from transparent and that the network refused to hand Mr. Nasser the letter of termination that was signed by IMN head, saying that it has to be signed by Ali AlShlah, Head of the Board of Trustees.
Our Association learnt that the investigative committee was formed according to the direction of MCC; this by itself is a controversial point since both sides are considered totally independent. No committee should be formed according to the others wish. The report that was raised by the legal expert was totally neglected, that stressed upon the fact that MCC’s Head Safaa Rabii, is not offended by any means in the report that was published on the site dated Feb. 12th 2016, that highlighted a number of corruption involvements.
The reason behind concealing the termination letter is to prevent the journalist from filing any complaint since complaints are only valid during the first ten days of issuance; thus recording another legal violation.
At the time that the Association supports fellow journalist Muntadhar Nasser, it confirms the violations in Iraqi valid laws committed by IMN Head and members of the investigative committee by misinterpreting the stipulations of law no. 20 of IMN, and demands that the Parliament takes part in investigating the incident and hold all violators accountable.